Fill out the form below to send your request: fill in as many sections as possible to ensure the answer meets your needs closely.

Lazise is history, culture and spas on lake Garda. Tourist information about apartments, camping and hotels for your holidays to lake Garda, Italy. 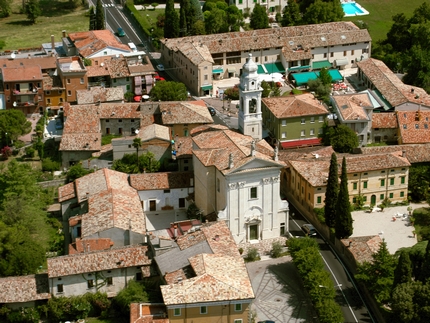 Lazise, a centre of 5.500 inhabitants, is situated in the widest point of the Lake and it is almost completely surrounded by medieval walls.
It is one of the oldest towns of the Lake Garda, and it was inhabited since the Neolithic; the latin name lasitium probably comes from laceses, ie lake place.
The Romans fortified the place and during the X century Ottone II from Germany gave the town particular privileges.
The castle, the walls, the ditches and the doors go back to the XI century.
Lazise was the first town on Lake Garda which declared itseld free city-state and defended itself against Turisando from Verona in 1179.
It belonged then to the Scaligeri, to the Visconti of Milan and to the Serenissima (Venice). During the period of domination of Venice a curious episode happened: the Lega of Cambrai was founded against Venice and defeated it in 1509. The Captain Zacharia Loredan had to sink the remaining ships into the port of Lazise and the remains of two ships were found in 1959 by divers.
Venice came back later and ruled until the arrival of Napoleon. Then the Austrian came and finally the Reign of Italy.